Must be This Tall to Write Multi-Threaded Code

David Baron put this up in Mozilla’s San Francisco office a while back: 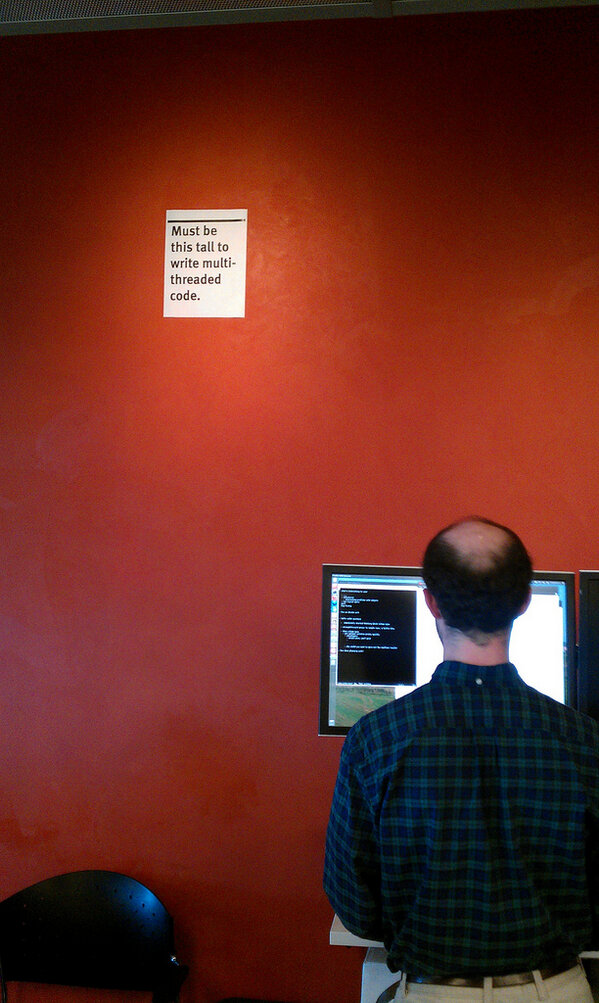 This is cute way of saying that writing safe concurrent code is, at present, rocket science. This is unfortunate, because the future of computing is shaping up to be all about concurrency. Fundamental engineering constraints like power usage are steering microprocessor manufacturers away from single-core architectures. If the fastest chips have N cores, a mostly-single-threaded program can only harness (1/N)th of the available resources. As N grows (and it is growing), parallel programs will win.

We want to win, but we’ll never get there if it’s rocket science (despite the industry-leading density of rocket scientists hacking on Gecko). Buggy multi-threaded code creates race conditions, which are the most dangerous and time-consuming class of bugs in software. And while we have some new superpowers to help us react when they inevitably occur, debugging racey code is still incredibly costly. To succeed, we need to prevent races from happening in the first place.

Why do races occur? Opinions differ, but I argue the following:

Races are endemic to most large software projects because the traditional synchronization primitives are inadequate for large-scale systems.

Small-scale systems are easy to build and maintain. So long as the details can all fit in the heads of a small number of programmers, it’s relatively easy to shuffle things around to meet requirements and verify that all the pieces interact properly.

Large-scale systems are a different story. Many cooks in many interdependent kitchens necessitate strong, assertable rules that allow programmers to reason about the unknowable. These rules provide a baseline level of order, but to be truly useful, they need to be predictable: different programmers should be able to invent similar or identical rules by deriving them from a small set of core principles, such that everyone can make reasonable predictions about the high-level behavior of code they haven’t read.

Software engineering at this level is an art, whose core mission is to find the right abstraction - one that naturally offers guidance and solutions for the problems that need to be solved (especially the ones that don’t exist yet). The wrong abstraction is painful and error-prone. The right one is a never ending stream of goodness from which all answers flow.

Locks don’t lend themselves to these sorts of elegant principles. The programmer needs to scope the lock just right so as to protect the data from races, while simultaneously avoiding (a) the deadlocks that arise from overlapping locks and (b) the erasure of parallelism that arise from megalocks. The resulting invariants end up being documented in comments:

And so on. When that code is undergoing frequent changes by multiple people, the chances of it being correct and the comments being up to date are slim.

There’s a familiar story that has repeated itself many times throughout Gecko’s history:

In this approach, threads own their data, and communicate with message-passing. This is easier said than done, because the language constructs, primitives, and design patterns for building system software this way are still in their infancy. Rust is designed from the ground up to facilitate this, and uses its type system to enforce single ownership of data. We’re already using some Rust in Gecko, but we’re not going to be rid of C++ anytime soon. So it’s critical to explore ways to incrementally add safe concurrency in C++.

During the first half of this year, I did a tour of duty with the Multimedia Playback Team to help rebuild the heavily-threaded decoding and playback pipeline to be less racey. To solve the problems I encountered there, I built some new tools and primitives that ended up being game-changers in our ability to easy write easy and correct concurrent code.

More on that next time.